You are here: Cyborg5 Home > CY's Art and Graphics > My First “Computer-Generated” Christmas Card (circa 1976)

Starting in 1995 I begin making Christmas cards using the Persistence of Vision Ray Tracer (POV-Ray) open-source freeware software which I helped create. Using a script of text commands it generates photorealistic three-dimensional images with realistic lighting, shading, shadows and other image effects. I’m going to use this blog to share some of my creations throughout the years however before I start off with the 1995 card, I thought it was important to share with you my very first “computer-generated” Christmas card.

It consisted of some ASCII art spelling out the words “Merry Christmas” followed by a cheesy bit of verse that I composed. The entire thing was printed out on green bar computer pape line printer of the DEC-System-10 computer at IUPUI when I was a computer science student there. An image of the card is shown below but in case you can’t read it, following that is the verse that I wrote (questionably bad punctuation included). 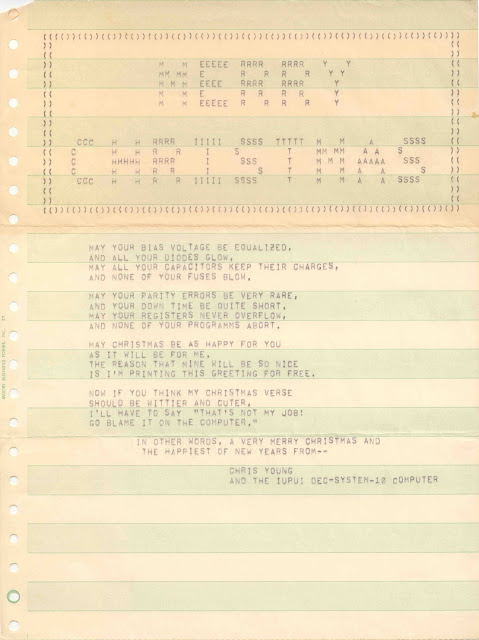 MAY YOUR BIAS VOLTAGE BE EQUALIZED,
AND ALL OF YOUR DIODES GLOW.
MAY ALL YOUR CAPACITORS KEEP THEIR CHARGES,
AND NONE OF YOUR FUSES BLOW.

MAY YOUR PARITY ERRORS BE VERY RARE,
AND YOUR DOWNTIME BE QUITE SHORT.
MAKE YOUR REGISTERS NEVER OVERFLOW,
AND NONE OF YOUR PROGRAMS ABORT.

MAY CHRISTMAS BE AS HAPPY FOR YOU
AS IT WILL BE FOR ME.
THE REASON MINE WILL BE SO NICE
IS I'M PRINTING THIS GREETING FOR FREE.

NOW IF YOU THINK MY CHRISTMAS VERSE
SHOULD BE WITTIER AND CUTER
I HAVE TO SAY "THAT'S NOT MY JOB!
GO BLAME IT ON THE COMPUTER."

IN OTHER WORDS, A VERY MERRY CHRISTMAS AND
THE HAPPIEST OF NEW YEARS FROM –-

CHRIS YOUNG
AND THE IUPUI DECSYSTEM-10

Here are some of the obscure references behind the text.

“Bias voltage” is something that tape recorders use to eliminate background hiss and noise. Rather than having the electricity go plus or minus a couple of volts say from +2v to -2v the recording head adds a bias so that perhaps it goes from +5v to +1v. I don’t know if these values are even in the ballpark of what’s actually used I’m just explaining the principle. In the mid-1970s cassette tapes came in different varieties. The ordinary tapes used “normal bias” and the newfangled metal oxide tapes use something called “high bias”. When you play back the tape, in order to get the best results your playback had to equalize the bias voltage properly. There was little switch you had to throw between high bias and normal bias. I still don’t understand completely what it means but it sounded cool so I included it.

Capacitors and fuses are pretty straightforward. No explanation needed.

“Parity errors” when computers transmit data over a serial line they generally transmit eight bits at a time but in order to detect mistakes they transfer a ninth bit called a “parity bit”. Parity can be “odd” or “even”. That means in the string of 1s and 0s you add up the number of 1s and see whether you get an odd or even number. If you’re expecting odd and you get even that’s called a parity error. That’s bad news. You want them to be “very rare”.

“Programs abort” anytime a program stops unexpectedly is called an aborted program. (Bad joke from the archives… I’ve got one of those new “RU-486” CPUs and it’s causing my programs to abort.) ((Explanation of the explanation… Intel made a processor called a 486. However RU-486 was the name of an early “morning after” abortion pill.))

“Free printing” if I had typed up the text and taken it to the library and xeroxed it it would have cost me 10 cents per page. But if I typed it into the computer and told them to print me 30 copies of it, it was free. I had a psychology professor who had discovered this and rather than type up his class notes or handouts and xerox them, he would just put them on the computer. They would print as many copies as he needed to distribute to his students for free. It seemed strange to get class notes from a liberal arts teacher on green bar computer paper but it was pretty smart of him. It inspired me to print these cards that way.

“That’s not my job!” There was a popular TV show called “Chico and the Man” starring the late Freddie Prinze Sr. He was a bright and rising young Chicano standup comic who at the age of about 19 got his own sitcom. He played Chico who worked in an auto repair shop run by cranky old man played by the late great Jack Albertson. Although he talked in plain English most of the time, whenever “the man” would tell “Chico” to do something he didn’t want to do he would throw on a very thick Hispanic accent and say “ezz no my chob mhan”. (It’s not my job). That phrase got to be a pop-culture catchphrase. Tragically Freddie Prinze committed suicide at age 22. He was the father of TV and film star Freddie Prinze Jr.

“Blame it on the computer” is to this day a pop-culture catchphrase.