You are here: Cyborg5 Home > CY's Art and Graphics > It All Started with the St. Gabriel Logo

Continuing with my saga of computer generated Christmas cards, before we get into the first card I want to tell you about my ray traced version of the St. Gabriel the Archangel Catholic Church logo. Shown here on the right.

The image was designed by St. Gabriel parishioner and artist Joanne Austell to commemorate the 25th anniversary of the founding of our parish on the northwest side of Indianapolis. I’d always been a big fan of the image and I promoted it and used it wherever I could especially when designing the website for the parish. I wanted to create a three-dimensional looking version of this elegant 2-D line drawing.

The image below is what I came up with. I actually do a very good job of re-creating it to the extent I had hoped. When I was working on it I didn’t have a copy of the logo handy at the time. Somehow I thought original line drawing had a nose on it. I remember it had a very distinctive shape and I spent a lot of time trying to re-create that contour. Unfortunately the contour was remembering was actually the chin of the original drawing. By the time I had completed the image and realized my mistake I had already gotten used to seeing the nose on my version so I kept it. My image actually has no chin at all. I spent a lot of time trying to get the sweep the arms just right. I never was completely satisfied with that but at least it’s closer to the original than the face was.

This angel image would be reused in my 1995 Christmas card as well as several other cards. It also was the basis for this style of all the figures used in subsequent cards. So if I’m going to tell the story of how I created all of those Christmas cards we really needed to show this one first even though it wasn’t a Christmas card.

You can click on the image for a larger version. 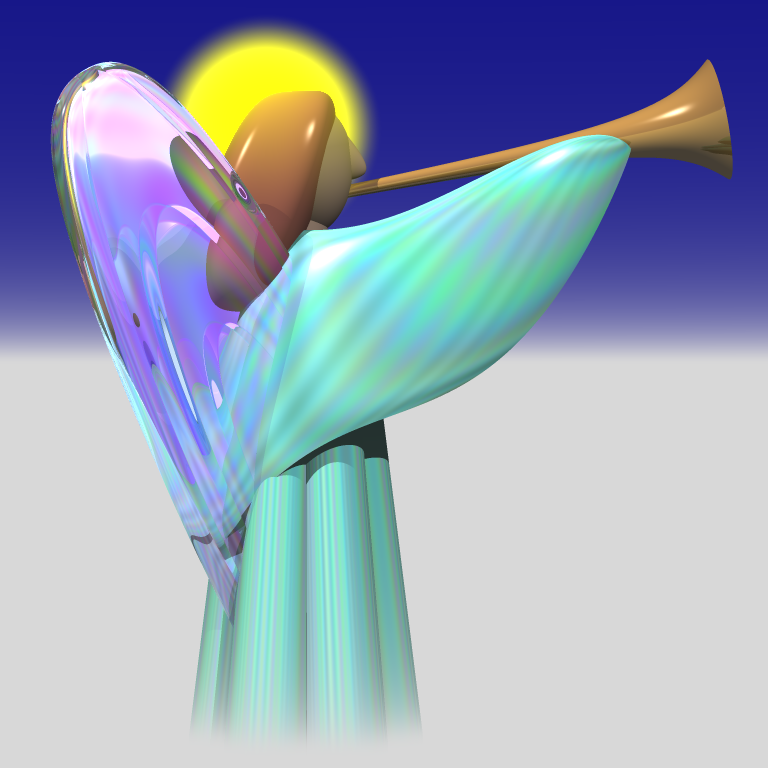 At one point I had created detailed video explaining the mathematical formulas behind the various shapes and a sort of step-by-step visual explanation of how I pieced together the geometric shapes to create the image. Unfortunately I never completed the video and part of the files I used to make it (most notably the open captions and the voiceover narration) somehow got lost. I’m going to go back and re-create that video someday but for now you can just enjoy the still picture.

In the next installment we finally get to my 1995 Christmas card.