All these blog entries up till now have been leading up to my first real computer-generated Christmas card. This was the cover image on the card. 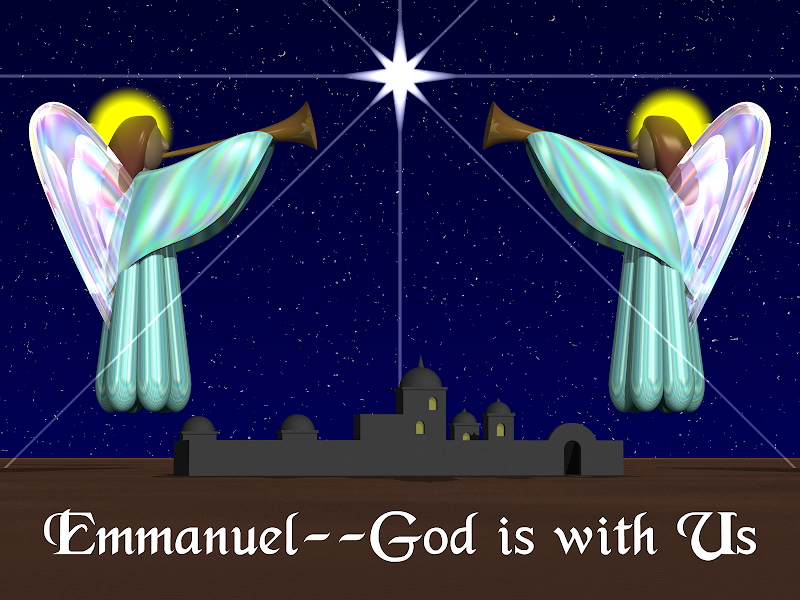 The card was printed on ordinary 8.5″ x 11″ paper one quarter size with a quarter inch margin. The page was then folded twice to make a 4.25″ x 5.5″ card. On the inside was the following message.

This would be followed by my signature. I actually signed my name one time on a piece of paper, scanned it and turned it into an image which I cut and paste into Microsoft Word every Christmas card since then. So if you get a Christmas card from me in 2013 my signature will look exactly like it did in 1995 because it’s the same image.

The word “Emmanuel” is Hebrew for “God with us”.

While this image looks like a couple of angels in the foreground, the Star of Bethlehem high in the background, and Bethlehem itself on a distant horizon. It is in fact a clever bit of forced perspective. When creating models for ray tracing sometimes it’s important to model the objects at a particular size in order to get the proper lighting effects and texture effects. I also wanted to get the idea that the scene was being backlit by the Star. However with a bright light source in the distance casting shadows forward, the angels themselves were too dark. When I tried shining a light on the front, it illuminated the ground and the Town of Bethlehem too much. I actually ended up creating four spotlights with two each shining on the angels to illuminate them. But there’s more at work here. The “Little town of Bethlehem” is much littler than you think. It is actually a small model sitting in the foreground. Also the Star looks like it is distant with lens flare rays appearing in front of the other objects. In fact Star and the rays are a physical object in the foreground between the Bethlehem model and the angels. In the image below I’ve moved the camera back and up at a different angle to show you what the model really looks like. Sometimes when you’re trying to compose a good-looking image, you just have to fudge it. 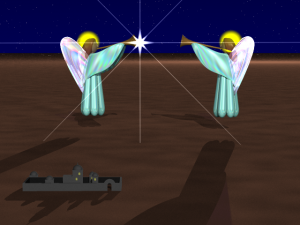 The secrets behind the forced perspective in this image.

We’ve not seen the last of St. Gabriel Angels. It will show up again in the 1996 Christmas card as a Christmas tree ornament. Stay tuned…