A friend of mine once sent me a Christmas card that showed a can of peas being poured over a globe of the earth. The caption read “Peas on Earth”. This incredibly groan inducing pun was a partial inspiration for this particular image. Also I had obtained an image map that was a satellite view of the earth and so I thought wrapping that image around a sphere would make a nice Christmas ornament. Rather than being “Peas on Earth” or a traditional “Peace on Earth” I put “Peace on Earth” on the Earth.

The image also gave me the opportunity to try out some bump maps to give the ornaments some texture. And of course I wanted to reuse the Gabriel Angel which I thought made a nice ornament as well. Here is my 1996 card 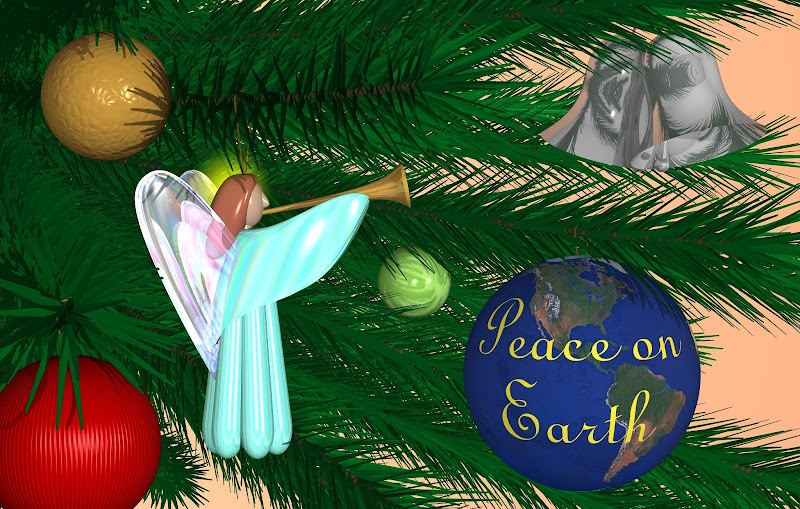 The most difficult part of this image was designing the evergreen branches, positioning them, and positioning the ornaments hanging from them. One of the problems with computer modeled objects is that they have no solid substance to them. Objects can pass through one another even when you don’t want them to. Several early drafts had pine needles protruding into and back out of some of the ornaments. I had to fudge the position slightly. There still may be some needles sticking into the ornaments but it’s not as obvious a mistake unless they suddenly appear poking out the other side.

The silver bells were an interesting challenge. They are part of a cubic equation which is…

One of the problems is that they have a highly reflective surface and there was nothing beside the camera or to either side of the image to reflect. It was just black void. Therefore the entire model was “encased” in a white box with a tan surface behind the image.

I did not actually model an entire Christmas tree in this image (although I would in future images). In 1996 even this small model was pushing the limits of what my computer can handle. There are actually six rows of branches and eight “columns” of branches. I said columns with quotation marks because they are actually arranged radially around a central axis. The images below show a real model at a wider angle and from different directions.

There were messages in both the upper and lower panels of the card as you opened it vertically. They read as follows…

On the backside of the card following explanation of how it was created.

Note that the email address I gave was an old CompuServe email address and my webpage was with local ISP iQuest.net which was the first Internet provider I ever used. That account and page are no longer active of course.

The previous card had a message on the back but it did not say what kind of computer rendered it or how long it took. This one notes that it was a 100 MHz Pentium and I presume that the 1995 card was rendered on the same PC.

The original card was printed on plane card stock not glossy. I cut the stock so that the folded card was 4″ x 6″. In those days you couldn’t buy greeting card stock with envelopes. In order to get greeting card size envelopes I went out and purchased the cheapest ugliest Christmas cards I could find. I threw away the cards and used the 4 x 6 envelopes. The image itself had a quarter inch margin all around making it 3.5″ x 5.5″. Assuming I rendered it at 300 dpi, which was typical in those days, it came out 1050 x 1650. I re-rendered the image using my current Intel i7 quad core under Windows 7 and it ran in just 10 minutes 24 seconds compared to 7 hours 28 minutes on that old computer. On the new machine I cranked it up to 600 dpi which is 2100 x 3300 and it only took 31 minutes: 38 seconds. The speed difference is really amazing.

The image that is uploaded here is a modern rendering. There must’ve been some minor changes in the way POV-Ray handles the halo feature because the halo on the angel is much dimmer than it was on the original image. I haven’t bothered to readjust the source file so the halo comes in brighter and more solid.

In our next installment we will display what is arguably my most beloved image.